The popular beach life, eco-tourism and scuba diving destination Roatán is a Caribbean located roughly 65 kilometres from the northern coast of the Honduran mainland, between the island Útila and Guanaja. Roatán is the largest of the Bay Island of Honduras. In older texts about Roatán, you may encounter the spellings Ruatan and Rattan.

Roatán is found near the Mesoamerican Barrier Reef, which is the largest barrier reef in the Caribbean Sea and the second-largest in the whole world (only the Great Barrier Reef in Australia is longer). The island itself rests on an exposed ancient coral reef. The easternmost quarter of the island is separated by a channel which runs through mangroves. On average, the channel is 15 metres wide.

The reef is home to stunning underwater creatures and also frequented by more nomadic marine animals – including whale sharks. Unsurprisingly, Roatán is renowned for its scuba diving and home to numerous dive schools. The island also have a number of sandy beaches, all of which are public.

Most of the inhabitants on Utila live on the western half of the island, and this is also where you find Coxen Hole, which is Utila´s most populous town.

How big is Roatán?

Roatán covers 83 square metres. It is an elongated island; roughly 77 km long, but less than 8 km across at its widest point.

Roatán is a tropical island and enjoys daytime temperatures in the 25-30 degrees C range on most days, year round.

The hurricane season is mid-September to early November, although the island is outside the most dangerous hurricane belt in the Caribbean and is usually spared from direct hits.

The rainy season is between October and January, with November and December being the rainiest months.

During the winter months (the main tourist season), the airport receives regular international flights from Montreal and Toronto, and there are also charters coming in from various locations.

There are direct busses from Guatemala city (Guatemala), San Salvador (el Salvaador) and Managua (Nicaragua) to the Roatan ferries.

Here are a few examples of settlements on Roatán.

This is the largest town on Roatán and also where the international airport is located. Coxen Hole is the centre for banks, major stores, etcetera.

West Bay is on the far west of the island and has become a popular vacation spot due to its powdery white sand beach. Nowadays, several large resorts are found there. The reef is only a short swim away, which is great news for snorkellers.

Chiefly known for its bars and restaurants, but also have accommodation. Fun nightlife, often with live music. Many dive shops are located in West End.

This is chiefly a residential area, but a few resorts are located here as well, alongside dive shops and restaurants. Several non-profit organisations for the community are based in Sandy Bay, and some of them welcome volunteers. Examples are Clinica Esperanza, SandCastle Library, and Care4Communities.

Carambola Botanical Gardens cover 40 acres of land and have several jungle trails that are excellent for hiking, nature photography, and bird watching.

French Harbour, which have several popular restaurants, is located roughly 10 km east of Coxen Hole, and many tourists never venture further east than this when visiting Roatán. 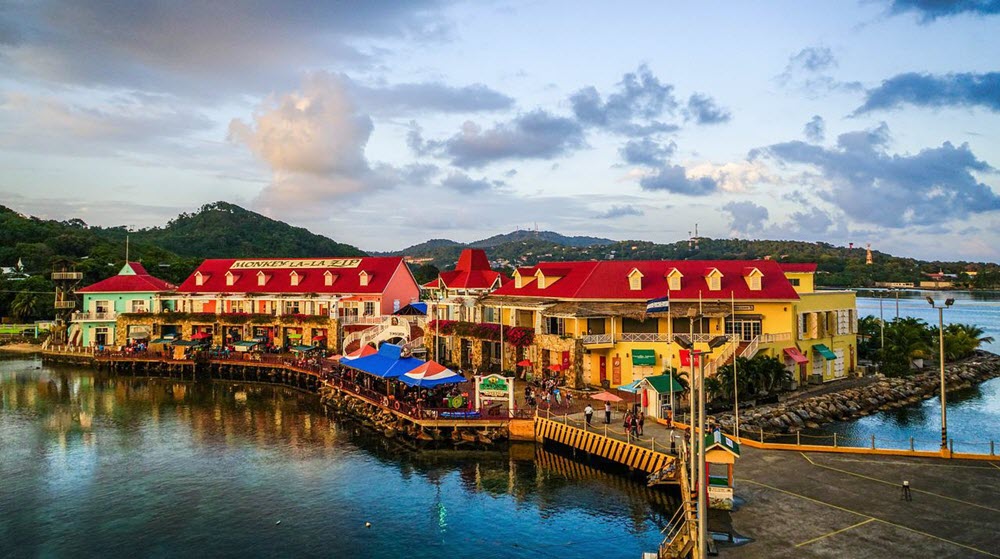 This is a fishing community where a majority of the population are Garifuna. Garifuna is a mixed African and Caribbean indigenous (Arawak, Kalinago) people that developed on Saint Vincent.

If you are in the mood to explore east of French Harbour, one example of an interesting destination is Jonesville. From Jonesville, you can take a small water taxi to reach the Hole-in-the-Wall restaurant.

This is a fishing community on the eastern side of Roatán where the brightly coloured houses are built on stilts over the water. The aforementioned Hole-in-the-Wall restaurant is accessible by water taxi from here.

Camp Bay Beach, located slightly more than 7 km from Oak Ridge, is largest natural beach on Roatán. It is possible to take a taxi to Camp Bay, but beyond Camp Bay the roads stop and the mangrove starts.

Port Royal, on the northern side of the island, is known for its historical association with piracy.

In the 21st century, the use of Spanish on Roatán has increased, as the growing tourism sector has attracted mainland Hondurans to move to the island for work. Still, many of those who have Spanish as their native tongue also speak English and speaking at least basic English continues to be a requisite for many tourist-facing jobs on Roatán.